The Story of Grand Cru Grenache

Anyone familiar with the term “Grand Cru” will, no doubt, associate it with the great wines of Burgundy. Revered wines, commanding high prices.

What distinguishes Grand Cru Vineyards from Village level wines?   It is best explained by geography. The village sits at the bottom of the hills and its vines benefit from the richer soils that have deposited on the flat. The wines produced from these higher yielding vines may well be attractive but rarely capable of being profound. As one moves up the hill, away from the village, the incline becomes steeper, the exposure to sunlight more telling, the soils eroded and the resulting fruit is more concentrated and intense – these are the Premiers Crus. These wines may well be capable of greatness and can possess great balance and power. As one rises further, the soils are more eroded, the vines increasingly struggle and the yield becomes noticeably restricted. Combined with higher water run-off and greater exposure to sunlight, this fruit represents the limits of production before the higher reaches are no longer able to support vines. It is often said that the greatest wine is produced on the very limits of where it is possible to grow vines and, in some ways, this is what Grand Cru represents. Concentrated, supremely balanced fruit which has great typicity and is capable of producing great wines.

The notion of terroir is something that most Aussie winemakers are now much more comfortable with. Australia has some of the most diverse geologies in the world which have blessed us with some of the world’s great terroirs.

In France, the influence of terroir is arguably most keenly felt in Burgundy where Pinot Noir, with its sensitivity to yield and to the suitability of clonal selection, reaches its apogee. In Australia, where place has sometimes played second fiddle to process, one variety in particular is finding that when it comes to quality, location is everything.

Grenache was first planted in McLaren Vale in the 1830’s.  Many of the original sites that were planted are capable of greatness. As winemaking has changed, with more focus on clarity and energy of fruit, aromatic profile and balance, those truly great sites have been revealed.

The old, low yielding sites are difficult to cultivate but worth the effort. Today, Grenache represents just 1% of the total Australian vineyard.  Focus has moved from looking at Grenache as a workhorse variety to be lost in blends, to producing single variety wines capable of narrating their incredible history. The best are now elegant, aromatic  and delicious expressions of the variety.  These wines are now regarded as world class.

In a quest to produce the finest single variety Grenache, a new, more granular understanding of terroir has emerged – and with it, an understanding as to where Australia’s Grand Cru Grenache might hail from.

One sub-region within McLaren, Blewitt Springs stands out from others.  The best vineyards are situated in the north east of the region, blessed by an elevation of 200-250 metres.  The vineyards are cooled by breezes coming off the Gulf of St Vincent. The great sites are on the SSE slopes, their old, gnarly bush trained vines enjoying the Maslin sand that is the hero soil type of the region. Phylloxera proof, free draining and adept at providing the indirect sunlight that the thin-skinned Grenache so loves, this is where Grenache flourishes. But even then, selection within a vineyard, akin to the selection between Premier and Grand Cru, is vital.

Vines in the fertile lower sections of a vineyard such as Thistledown’s Sands of Time, enjoy the more fertile soils by growing larger canopies and heavier yields. Those at the more exposed top section are more fragile, their canopies more spindly and less protective against the sun. But there, in the middle section, the Grand Cru, lie the vines which have the perfect balance between canopy and exposure, yield and concentration. The fruit that they produce is heady, exotic, laden with floral, exotic spices, redolent of a Moroccan Souk. Energetic, multi-layered with enticing texture. Not just capable, but possessing world class.   At Thistledown, we continue to search out these Grand Cru vineyards.   by Giles Cooke MW, winemaker/owner of Thistledown.

This author does not have any more posts. 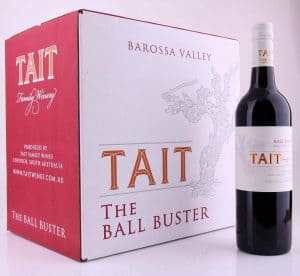