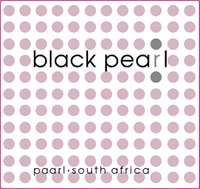 Black Pearl Vineyards is a winery owned and operated by the Nash family, who relocated from Maine in 1995 to South Africa. They make the wines in the vineyard, and the focus is on producing limited quantities of high-quality grapes. From berry to bottle, it is a complete hands-on family enterprise. Mary-Lou Nash is the chief winemaker, viticulturist, tractor driver, marketer, and general “Jill of all trades” at Black Pearl Vineyards.

The name “Black Pearl” was inspired by the fact that the vineyard sits on the slopes of Paarl Mountain, and Paarl Rock resembles a black pearl after it has rained, as well as the fact that black pearls also have true rarity value. Black Pearl Vineyards is un-irrigated, and the high trellising system, severe pruning, and canopy management are all managed to ensure low-yielding, stress-free, ripe fruit.

Read MoreRead Less...
The vineyard sits on the western slope of Paarl Mountain, which is part of the Cape Floral kingdom. Above stretches Renosterveld, an indigenous flora of which only 2% remains in the country and which the family is conserving in this World Heritage area. You can typically find Renosterveld in shale-derived soils that have a high percentage of clay content. Shale bases soils form over shale rock parent material, developing from the deposition and compression of clay and silt in ancient inland lakes and seas.The diversity of bulb species in Renosterveld is staggering compared to anywhere else in the world.At the end of the last century, many of the more showy flowers were exported and became best sellers on the international flower markets, e.g., gladiolus, and freesias. The grapes grow on similar terroir on which the Gladiolus and Freesia also originated. The resultant wine from this property is genuinely terroir-driven. Mary-Lou hand planted the vineyards on Rhenosterkop farm and taught herself winemaking before becoming a Cape Wine Master.ABOUT: Mary–Lou Nash After graduating with a Bachelor of Arts, magna cum laude, she went on to teach English in Japan and travel throughout Asia for four years.Her major (at the University of New Hampshire) was Anthropology, so she spent a lot of time learning about other countries and cultures. "Free Tibet" was a big slogan at the time, and her close friends were obsessed with that area. She found it fascinating but didn't have the cash at that time to travel. Then she heard about the JET program, which brought native English speakers to Japan to teach English. That was her door into Asia. In 1990 she was flown to remote Mie-Ken, where she spent two years teaching English in middle school. Fabulous years, and in the end, she had enough money to travel. She took the slow boat to Shanghai and spent the next two years backpacking through China, Tibet, Nepal, India, Pakistan, Thailand, Malaysia, Indonesia, New Zealand and Australia.[Remember, this was traveling before wi-fi, cell phones, and a McDonald's on every corner.]It was a truly amazing experience. Before coming to South Africa in 1995, her only wine experience was sailing off the coast of Maine with her Dad and drinking magnums of cheap Chilean wine in the evenings. Her first South African wine taste was an off-dry Steen (Chenin Blanc) from Simonsvlei! Before that, she was a beer drinker (and still is!) Her passion for wine started when she was thrown in the deep end of her first harvest of Chenin Blanc at the farm "Rhenosterkop" which her Dad had bought from a friend in 1995. With the 2 farmworkers and their wives, she picked 25 tons of Chenin Blanc and drove it to the nearby Co-op with an old Fiat tractor and a 3-ton trailer. After that, she told her father that if he paid for her food and booze, she would stay for one year and manage the place for him. That was over 20 years ago! This was the very beginning of her passion for wine. PLANTING RED GRAPES Mary-Lou and her Dad got expert advice from the head viticulturist at the nearby Co-op, on what varietals suited their farm the best. They dug profile holes and got the soil analyzed. The Oakleaf and Glenrosa soil was best suited for mid ripening reds. The choice of clones was slim in 1997, but they jumped on the (newly trendy) Shiraz bandwagon. Cab followed the next year for a bit of variety. Merlot was out due to water needs, and they were dryland farming. A few of the Chenin vines stayed around – but only a few! When asked to explain the "influence of their unique terroir, "Mary-Lou had to say: "Our wines have a fynbos and herbaceous character to them, which is from the land. The warm climate influences present themselves as upfront, ripe berry components, and our dryland farming adds to the intensity of our wines in both color and flavor. These are not wines for wimps!" She went on to say, "I am a winemaker by accident.I graduated Magna Cum Laude with a BA in Anthropology and didn't even drink wine until arriving in South Africa. I started doing harvests at friends' cellars and started the Cape Wine Academy courses in 1996 and became hooked instantly! Now I'm a Cape Wine Master and a permanent resident with two South African daughters (who's Afrikaans is much better than mine)!" "My career highlights are not based on monetary reward or receiving accolades but more on choosing a way of life that you can thrive and discover and experience new and exciting aspects. Every day is a learning curve. The wine industry is forever growing and changing. In this industry, I am lucky enough to not only grow and make wine, but to also be on the education committee of the Cape Wine Master program. I get to be a judge at wine competitions, and my book on garagiste winemaking in South Africa has been published. I am lucky to have a profession whereas a single mother, I can juggle my career and my two daughters, who are thriving academically, musically, and athletically at La Rochelle High School in Paarl." "My biggest challenge I suppose was starting at the bottom with absolutely no knowledge of wine or the industry, although that seems a long time ago and insignificant now. Also, only being able to harvest once a year! You have that one shot at getting it right!" When asked, "What is your top tip for other businesswomen and entrepreneurs in SA?", Mary-Lou responded, saying, "I'll steal the Nike ad, "Just do it!" If you have the passion and will, everything else will follow. I started with very little money and built my business slowly from 8 barrels of wine in 2001. Buy the books, research, and go for it! You've got to want it." Her philosophy - Live simply so that others may simply live.
Visit Black Pearl's website
See Black Pearl wines we sell