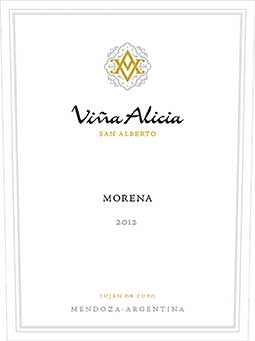 This is a dark red garnet wine, of good structure and excellent body. It has dark cherry or blackcurrant maturity. Time gives it cedar or cigar box undertones. Some blueberry and chocolate aromas can be found. Its tannins are tangible and generous. Cabernet Franc supplies raspberry, currant leaf and pebble aromas.

90 pts Robert Parker, Jr.’s The Wine Advocate (RP)
The 2012 Morena has the subtitle “seven clones” as it’s produced with a blend of five Cabernet Sauvignon clones and two different clones of Cabernet Franc (12%) from their San Alberto estate vineyard in Lunlunta, Luján de Cuyo. They get natural low yields and the grapes were harvested and fermented separately. They blend the seven different wines before bottling. Malolactic was in new French oak barrels where the wine aged for six months separately and a further 12-14 months after the varieties were blended. There are notes of fresh herbs, hints of mint and a volatile touch. There are some floral notes, too, and a notable absence of green aromas with something distinct that I could not really define, somehow perfumed and balsamic, sometimes it seemed like nutmeg, other times like Cherry Coke… The palate has fine-grained tannins, with the classical Cabernet granularity. There is ripeness without excess, in fact, it’s quite fresh for the year. 7,000 bottles produced.