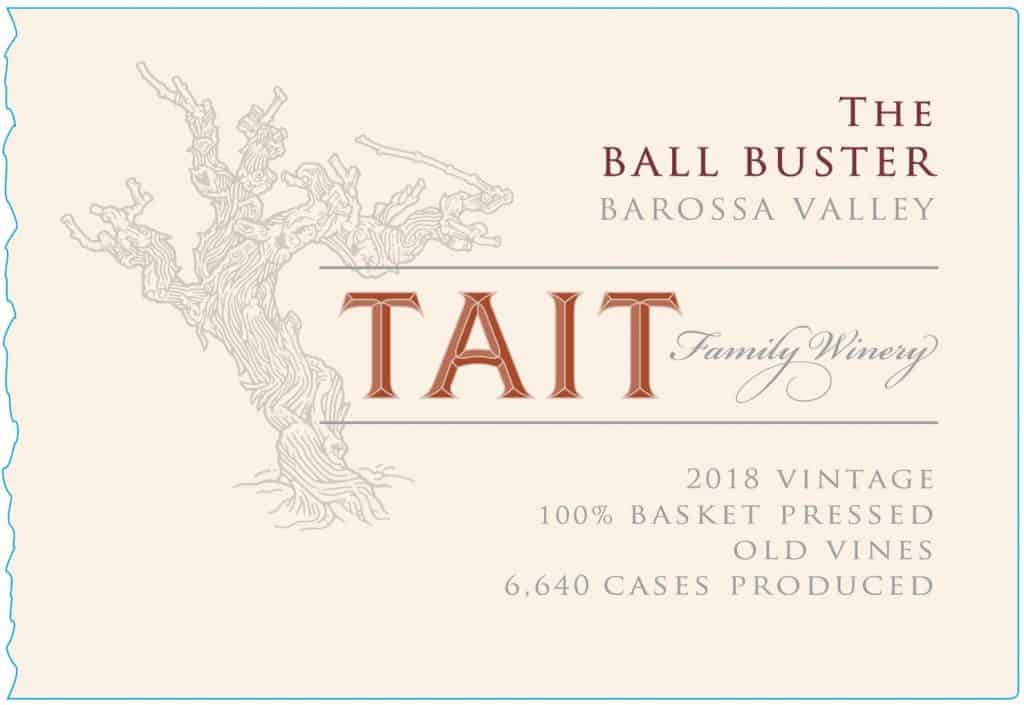 Fruit for the 2018 Ball Buster was sourced from 7 different sites in the Barossa Valley. Vine age varies between 10-30 years. The grapes are de-stemmed and tipped into large open fermenters, pH is adjusted and fermentation takes place over 7-10 days at a temperature of approximately 74 degrees F. Plunging and pumping over takes place 3 times a day during this period. The wine is then gently pressed using traditional basket presses. Juice is drained from there to barrel, where it spends 18 months in a combination of used French and American oak. The oak that is used, is there to impart some subtle flavors but more importantly, to create softness in the wine. Blending of the different components wine takes place to ensure a wine which is dark in color, rich and juicy on the palate and full bodied, but with good balance and length. Ball Buster is always bottled unfined and unfiltered.

2018 vintage is considered one of the standout vintages in the Barossa. The growing season started off well, with Winter 2017 rainfall being above average with spring rainfall being again normal until Christmas. The good winter rains set the vines up to develop a good canopy and ideal flowering conditions in late spring early summer set the vines up for average cropping level. January and February were warm and dry with a few hot days allowing the vines to slowly develop the fruit flavour without too much possibility of disease due to wet weather. The Barossa during March and April experienced an Indian summer where the days were dry but mild so that the grapes could achieve full and balanced maturity on the vines.

The first production of the Ball Buster in 2002 was 600 cases. It entered the market at a time when Aussie wines were on fire, but high scoring ones were expensive. Bruno Tait committed himself to making an awesome Shiraz based Barossa red, and having it retail for under $20. This vintage marks Tait’s 16th year of this iconic blend, named as a “tongue-in-cheek” tribute from Bruno to his wife, Michelle. This is the only wine in the world to ever receive 10 or more consecutive 90 point reviews or higher, in The Wine Advocate, at the $20 mark. In fact, the 2016 vintage marked 15 straight vintages since its inception, of 90 point or higher reviews – a feat that is unlikely to ever be repeated by any other wine. Not much has changed over the years. It is still made with high quality fruit and hand crafted winemaking. Even as production volumes grew, Bruno has been committed to maintaining quality and avoiding shortcuts and price gouging. For those consumers that enjoy the opulence of wines like The Prisoner, but would like some elegance as well – this one’s for you.