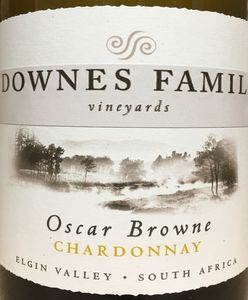 The nose offers up hints of salted butter and toasted nuts to the white peach and citrus fruit aromatic notes. A range of flavors are expressed, from vibrant floral, saline, citrus/tangerine and white peach to a dry, river stone mineral edginess. Even though this was given 100% malo, the palate is tightly wound, without any overt creaminess. The wine is medium bodied, showing some citric cut, a light, creamy peach component, toasted nut/almond and distinct minerality, all playing out beautifully, bringing this to a lovely dry, stony, mineral laden finish. There is wonderful power, without losing its elegance and all the while, retaining a beautiful, full, textbook Chardonnay flavor spectrum. Very Burgundian in style, leaning toward a cross between a Chassagne Montrachet and a Puligny Montrachet. This wine is built for the cellar and will pay rent handsomely if tucked away for a few years.

With the run of success that the Downes brothers have been having, with their cool climate wine project, making world class Merlot, Sauvignon Blanc and Pinot Noir, it should come as no surprise that they have released a jaw-dropping Chardonnay, at their very first attempt. In much the same way as the styling of their Merlot, leans toward
the right bank of Bordeaux, their Chardonnay could easily be mistaken for a top flight Burgundy. The fastidious nature of James’ viticultural practices suggests that this project was planned many years ago. The clonal selections were carefully thought out. The site and the soil was dutifully prepared. The vines, once planted, were nurtured for years, until the overcame their adolescence, before being tasked with yielding such high quality fruit. Nothing happens by accident with these fellows. Pleasantly surprised as they may seem, with their debut release of Oscar Browne, it is clear they were always aiming for greatness. Picked twice during harvest – earlier and later picks to maximize the flavor spectrum that the vineyards could offer. The bunches are chilled to 37°F overnight before being tipped
on a conveyor where they are then hand sorted, before whole bunch pressing. After pressing, the settled juice is then racked into barrel for natural fermentation by indigenous yeasts. The wine then undergoes 100% malolactic fermentation in 228L French barriques, for approximately 11 months. A blend of 3 Burgundian cooperages is used and the oak used is tighter grain with medium toast. (New oak – 23%, 2nd fill – 50% and 3rd fill – 27%) Each clone is vinified and matured separately to enhance its individuality, before combining in the final blend. The final assemblage looks like this (50% clone CY95, 25% clone CY76, 25% clone CY548) The finished blend is racked into stainless steel for 2 months to settle, with no fining and only a very light filtration before bottling.

Matured in barriques (228L) for approximately 11 months using a blend of 3 Burgundian cooperages. The oak used is of a tighter grain and medium toasted to complete its malolactic fermentation and maturation in oak barriques.