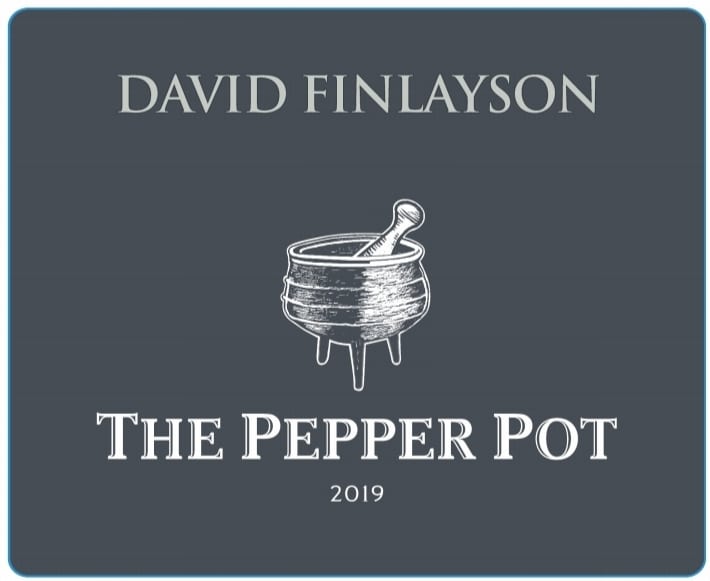 This wine was created to show the fresh, fruity and spice driven flavors of these Rhone varietals. The color is youthful and purple/red. The nose is one of crushed black pepper, dark mulberry and mixed berry coulis. Pure, clean dark red berry flavors flow onto a smooth palate with sufficient structure to warrant enjoyment with food such as gourmet pizza with carpaccio and green salad.

David is a huge fan of the Rhone. Here he wanted to create his interpretation of a southern Rhone style blend where the fruit and tannins are at the forefront of the wine, and the wood is barely noticeable.

The Pepper Pot is labelled as “Coastal” and is a blend of fruit from both Paarl and Stellenbosch – roughly 20/80 split. Paarl brings opulence and darker fruits, while Stellenbosch brings redder fruit and a touch of savory, spiciness. The image on the label is a traditional ethnic cast iron cooking pot  – common in most African households. Given that most of the continent of Africa cooks over an open flame, requiring that all meal components be blended in the same pot – ethnic African cuisine tends to be savory and sometimes spicy. Using Rhone varietals in this blend, helps to pay homage to the cuisine of Africa as well.

All grapes were hand-picked and bunch selection was done on sorting tables for all components of this wine. Multiple different ferments took place in steel tanks, using a variety of different techniques. The wine is made up from 11 different ferments, with all blending components of the wine being diverse in style. In some cases a small percentage of healthy stalks were added back to the ferments. A number of ferments were done with natural yeasts. Maceration on skins was selective depending on the various different flavors in the wine. All fruit was bag pressed. Post ferment maceration lasted about 7 days. During that time, punchdowns and pumpovers were conducted twice a day – about 20 mins at a time. Wine was then racked to combination of used French and American oak for 8 to 12 months, depending on cultivar. During the maturation process, wine was racked twice. The assemblage is done with the goal of creating a wine with color intensity, soft tannins, spiciness, texture and length on the palate. Fining was done with
Vegecol and a slight sulfur adjustment was done pre-bottling. Roughly 80,000 bottles are made.