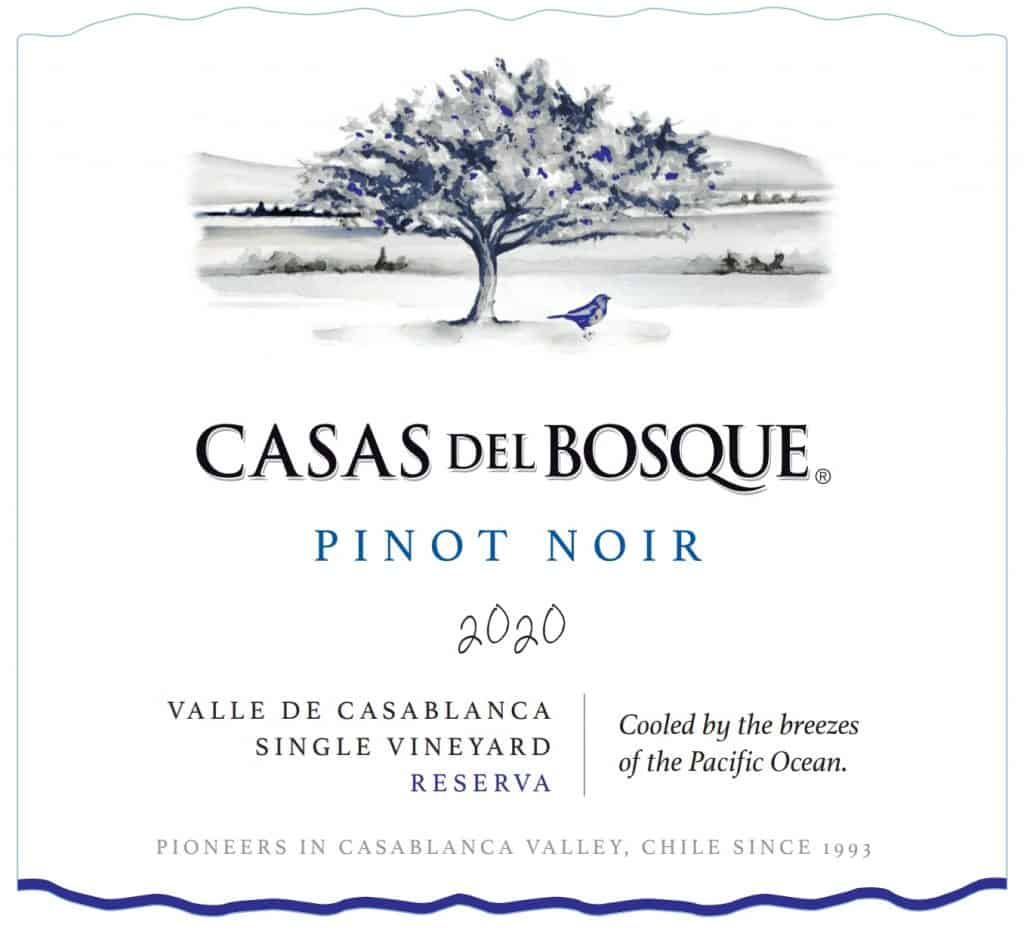 This Reserva Pinot Noir intends to be light and as fruit forward as possible, while remaining truthful to the refreshing acidity that the sandy soils and ocean breezes help develop in Casablanca. The fruit for the 2020 vintage was made up of a mixture of two very specific soil types found within the vineyard: sandy loam like the one found on the Tapihue side of the valley, and clay loam similar to the Lo Vásquez side. The resulting fruit had lower yields than the previous year, but the quality of the grape is outstanding.

Freshly fruited, with cherries and strawberries on the nose and a hint of hay. Light, fresh and balanced, with gentle acidity and a clean, fruity finish. Ideally served at 57-61ºF with charcuterie, cold meats and pâtés. Spring vegetables such as peas or grilled asparagus with goat cheese.

After initial experimentation with Merlot in the early 90´s, Casas del Bosque soon realized that the ideal cool climate red to plant in its own vineyard in Casablanca was Pinot Noir. Even though spring frosts are a common thing in the valley, the rootstock planted since the early 2000’s has flourished in a way that continues to amaze year after year.

Frequent foggy mornings, warm days and cool nights characterize the valley. The average temperatures in summer are 66ºF and in winter 51ºF. Mean diurnal shifts in March were around 55ºF. Yearly rainfall is around 15 inches, falling mostly between May and September.

This wine comes from a selection of fruit from ungrafted vines planted between 1999 and 2008 in Casas del Bosque´s own vineyard in the westernmost reaches of the Casablanca Valley. Mainly sourced from flat, loam soil blocks equipped with drip irrigation, these vines were cropped at an average of 6 tons per hectare (2.4 t/ acre). On arrival to the winery, the fruit was partially destemmed and cold soaked for 3-4 days. Fermentation occurred spontaneously, with daily punch-downs and pump-overs. Total cuvaison is two weeks at most. 12% of the young wine was drained to Slavonian oak cask for 10 months. The remainder wine was kept in tank on its fine lees and racked only once before the final blend was made. The first bottling occurred on November 8th, 2021 and a total of 4,100 cases were made.