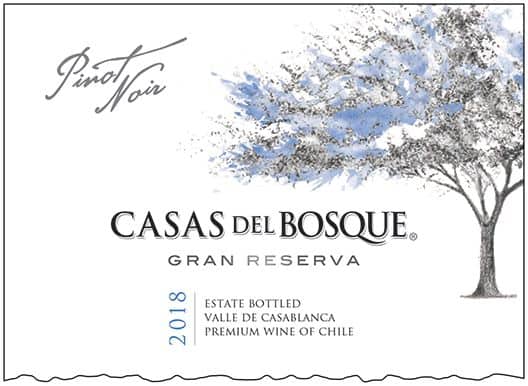 Strawberries and dried plums on the nose, with hints of toast and spice. Medium bodied, concentrated but balanced, with moderate tannins. Clean and slightly warm finish.

Casas del Bosque’s own vineyard is located within the coolest, westernmost reaches of the Casablanca Valley, at about 250 meters of altitude, and just 18 kilometers away from the ocean. These grapes are grown on hillside blocks facing from north-east to north-west, all of them planted between 2000 and 2010 and equipped with drip irrigation. The soils are red, iron-rich and granitic, and crop levels average 8 tons per hectare (3.5 tons per acre). Following hand harvesting and bunch selection back at the winery, all fruit was destemmed and cold soaked for 3-4 days. Spontaneous fermentation occurred in opentopped tanks, which were plunged by hand twice every day. After that, the young wine was drained to used French oak barrels for 12 months. Racking occurred twice: once in the spring, upon the completion of malolactic fermentation, and the second time for the final barrel selection. The wine was then kept in tanks on its fine lees until it was ready for filtration and bottling. 3.400 cases were produced.